It’s inevitable that we will get a cold or some sort of sickness, especially this time of year. In addition to the uncomfortable symptoms, the stress and guilt about skipping a workout makes you feel worse.  This is a real dilemma, especially for those who:

So what do we do? Take time off, risk getting out of shape and struggling to regain fitness- again? Suck it up and exercise – which we know helps so many aspects of health? What about the claims that exercise increases immunity, while other claims say that it does the opposite? Some say to feed a cold, but that hurts our fat loss goals, right? What about the experts that claim it’s ok to exercise if the symptoms are above the neck? Sounds confusing, huh? 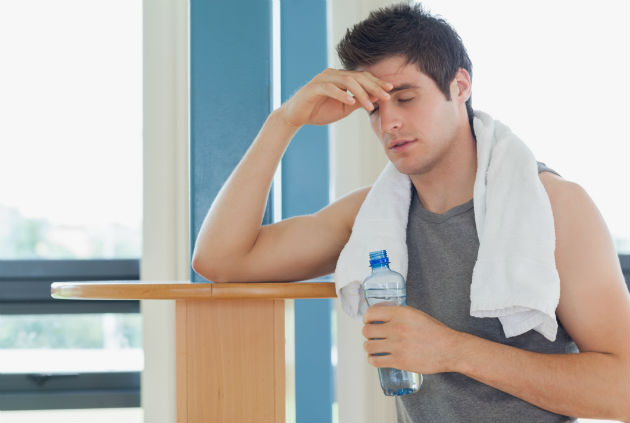 Let’s look at the evidence, and I’ll give my perspective from my experience with this issue.

Strong evidence suggests that those who exercise regularly have reduced incidence of sickness compared to those who do not. Rossi and friends wrote a great review about this in the December 2010 Strength and Conditioning Journal.  So we definitely know that exercisers have a better immune function. However, this doesn’t necessarily tell us what to do when we are sick, nor does that tell us what type of exercise (or if that matters) helps improve immunity. So let’s move on for more clarification

Exercise Impairs Immunity Too! Why the type of exercise matters

Research also shows that certain types of exercise actually increase your risk of infection. Most researchers suggest that moderate exercise is best for improving immune function. Again, that doesn’t really answer what to do about exercising when you DO have a cold in the short term….  we’ll get to that in a minute. Before we move on, it is vital to address what I think is a big problem in exercise research in general – that is the use of the term intensity. This is very important.

Typically, intensity refers to how hard something is. But this is not accurate in the world of physiology. Intensity instead is best defined as the percentage of one’s maximum relative the physical system in question. For example, if your maximum bench press is 100 pounds, then benching with 90 pounds is 90% of your maximum, which would be characterized as high intensity strength training. However, doing 2 sets of bench presses twice a week could not by any definition be characterized as high intensity aerobic and even anaerobic energy system training.

The studies that looked at the correlation between high intensity exercise and decrease immunity were mostly looking at endurance athletes, or athletes participating in sports training over 90 minutes a day, 6 days a week. In this case, it was really high frequency and high volume training at a moderate to high aerobic intensity (gauged by % VO2 max).

This means that endurance athletes training for triathlons, and some high-school through pro sport athletes will be more susceptible to infections and colds.  Of course, many other factors like stress, nutrition, and environment (close proximity to multiple other athletes) has a huge effect, so it is difficult to say that training by itself is the culprit.

For most of us, it is more common to train 3-4 times a week, each session lasting less than 60 minutes. This falls more in line with the moderate exercise groups than tend to have enhanced immune function.

Will your diet help you get over or prevent a cold?

There is some evidence that mega doses of vitamin C can reduce the duration of cold symptoms (form 10 days to 7 days), but the evidence is weak. It does seem that diet can enhance immune function however.

Studies show that protein deficiency is linked to reduced immunity. It seems that they defined deficiency as less than .36 grams per pound body weight, which is really low. This is all relative, as exercising adults (especially endurance athletes), older people, and adolescents need more protein. Some sources suggest as much as 1 gram or more per pound body weight. Suffice to say that adequate protein is important.

The same generality can be said about fat. Levels less that 20-30% of total caloric intake in fat lead to insufficient essential fatty acids, which some studies link to immune function as well. Again, no one following a sound diet is getting less than that, so it’s really not an issue, except for those who are still following the misinformation of the low fat fad. They might also still have giant bangs, love Duran Duran, rock some awesome leg warmers and watch re-runs of Mork and Mindy on their beta tapes:)

Some great research shows that those who do exercise for bouts longer than 90 minutes can blunt the immunosuppression of exercise by consuming a carbohydrate and protein drink before, during, and after exercise. For example,  140lb triathlete training 90 minutes a day should consume a 12-16 drink of 38g carbs, 9 g protein about 15 minutes prior, then sip on a similar solution during the workout, and have a 60g carb, 15 g protein drink after. I get into these pre-post workout calculations more in the nutrition guide that all of our clients have.

So unless you are working out for very long durations and frequencies, simply following a sound nutrition program will optimize your immune function.

Let’s address another important notion about diet and immune function.

I’ve heard some physicians and nutritionist say that rapid fat loss can reduce immune function. Not sure why, because there isn’t a shred of evidence that suggests this. In fact, some research shows just the opposite.

The Effects of Weight Loss and Gastric Banding on the Innate and Adaptive Immune System in Type 2 Diabetes and Prediabetes A. Viardot*, R. V. Lord, and K. Samaras The Journal of Clinical Endocrinology & Metabolism, doi:10.1210/jc.2009-2371

Research had participants follow 1000-1600 calorie diets. Then the subjects had lap band procedures (which was weird because they were already losing weight …). Pro-inflammatory markers declined dramatically as they lost weight, which the authors concluded was a sign of improved immune function (not to mention metabolic and cardiac function). Here’s where I think people got confused: the finding of reduced inflammatory cells may make people think that this was a decrease in immune function. However, immune function is based on a balance between normal elevation of immune cells to fend off attacks (a good thing), versus chronically elevated levels of immune cells (which is a bad thing). So rapid fat loss lowered the activity of the chronically elevated immune cells back to normal, which improved immune function rather them less at risk for infection.

Why do I feel some in the health and medical field just don’t want people to getrapid fat loss in spite of its dramatic effects?

My general rules of thumb: to exercise or not when sick

There is a rule of thumb in the medical community that goes like this:

If you have symptoms above the neck, exercise is fine.

If you have symptoms below the neck, stop and rest

If you have a fever, don’t exercise.

This is ok, but there are some problems. So I’m going to create my own rules that I think more accurately reflects the research and experience from someone that exercises and prescribes routine for a living:

1. If you have a fever, don’t exercise. Rest – a lot. Don’t stretch. Don’t stay home and work from your laptop in bed or answer emails. Simply rest or you will be sick longer.

2. If you have GI symptoms – Well, I don’t think I need to tell you what to do about that, so I’ll move on.

3. For other symptoms, I’ll break it down based on type of exercise and personality type:

Energy system training: Moderate intensity (under 80% max simply rated at less than an 8 out of 10 – ten being an all-out maximum), low duration,  moderate frequency (3-4 times a week).

Beginners/fat loss: Focus on rest, diet, corrective exercise, dynamic warm-ups, and resistance training as above. I tend to give more encouragement for these clients to exercise when they are symptomatic (again, not if they have fevers). Mostly because their exercise habit is fragile, and also they aren’t capable of exercising at the intensities that cause over training and immune compromise.

You won’t burn a bunch of calories now, so this is not the time to push to new limits. But this might be the time to keep the routine of your new and perhaps fragile fitness commitment intact. At this stage, the focus is on learning the routine via proper technique anyways, and you can always push the sets and reps later. If symptoms allow, don’t back off how much weight you use. But cut out some sets, allow plenty of rest between sets. Circuit training and complexes may need to be backed down a bit. Intervals can be tolerated very well, but your work phase will not be nearly as intense.

Endurance athletes: I like them to take time off completely. They tend to be overworked and over trained, and the endorphin high of training is too tempting to trust them to not chase it. However, if they must train (which I totally get – stress release, etc), again I suggest they focus on corrective exercise and some resistance training. Most will lose it mentally if they don’t do some aerobics, so they are advised to do so with very low intensity 20-30 minute walks or rides. Best to do this inside if they have chest congestion and it is very cold out, as this can irritate the respiratory tract.

Strength athletes: Pretty much the same as the beginner/fat loss people, and there is somewhat of a mental issue here as well – but not like with the endurance athletes. The big difference is that training with weights at 70% of their max can still be tough to handle if they have sinus issues because the strength capacities are so high proportionate to others. Just because you can bench 300 pounds doesn’t mean your sinus cavities are 300% stronger that when you could only bench 150lbs! It also depends on positions. For example, bench press and bent over rows may make your head feel like exploding. But lunges and chins might be fine because you are upright. On the other hand, if you have chest symptoms you’ll be fine as long as you stay away from complexes, circuits, high reps, and low rests which tax the respiratory system too much.

I hope this gives you some clarity about a complex topic. Remember that there is no magic solution or quick fix for colds and viruses, beyond plenty of rest and good nutrition.  Exercise can still be part of the short term plan when you are sick, and it is certainly the best bet for long term immune function.

If you need help knowing when to exercise or what to do in the gym, we are always here to help.