During times like the holidays, taking a break from working out is common. Sometimes its a planned thing because of a vacation. Other times, it just happens because commitments and entertaining family gets in the way of your gym plan.

What effects does taking this time off really have on your progress? Is there evidence that you will lose muscle, strength, endurance, or regain body fat? I’ll review some evidence, as well as my observations from training hundreds dealing with these circumstances. 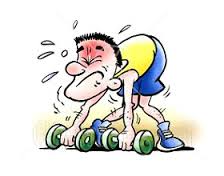 How fast did you lose your progress?

For example, if you are working on both aerobic training and resistance training, and you take time off from working out, you will see your endurance decrease quickest but hold on to your strength gains longer.

A unique study looked at young untrained folks and put them on a 3 month training program. One group did only aerobic reconditioning; the other group did only resistance training (Lo, et al JSCR Aug 2011). The resistance training group increased muscle mass and strength to a greater extent, and had similar improvements in vO2 max compared to the aerobic trained group. Both groups had similar loss in body fat, although there was a trend for a greater loss in the resistance training group. Then they stopped training, and were reassessed for up to 3 months later. The researchers found that after 4 weeks of no training the VO2 max gains were completely lost in both groups. By 3 months, the aerobic training group had lost all training improvements. However, the resistance training group had muscle mass and strength levels higher than at baseline, which means that they still held on to some of their gains even after 3 months of no training. The rate of muscle loss was greater than the rate of strength, likely due to the fact that the neural mechanisms of strength (how to best recruit muscle fibers) were better retained even as the muscle fiber size diminished. The general message here however is that strength lasts longer, and resistance training leads to more lasting results.

The effect of taking a break from training has different implications for different people. There are a lot of things to consider about deconditioning that will affect you differently depending on your situation.

If you were injured, you will lose strength and muscle much faster

One of the acute responses to injury is inhibition, where your nervous system goes “offline” as a means to prevent your muscles from moving the area and inflicting more damage. This process can be affected by not only the severity of injury, but the emotional, memory, and psychological issues surrounding the injury.

Accordingly, this lack of neural input as well as physical stress to the tissue can cause deconditioning in a hurry. I find this to be more dramatic in the lower extremities, which are used to receiving a high decrease of stress beyond exercise. In the absence of this stress, and in the presence of pain and inflammation, it is further magnified. My own personal experience, a loss of 26 lbs of muscle in 8 weeks after my patella tendon rupture, is a perfect example of that. Click here If I hadn’t been very active during my recovery, it would have been even more dramatic than that.

The more in shape you are, the faster you will lose Strength (sort of).

Unfortunately, if keeping your muscle gains is important to you, they will be short lived when you detrain. Similar to strength losses, this seems to be a bigger problem for those who are strength and power athletes, or those who have recently added muscle. Mujika and Padilla note this trend begins rapidly with detraining, but also notes that muscle mass will often increase in endurance athletes. This is consistent with multiple studies showing the deleterious effects to maintaining or increasing muscle mass with concurrent endurance exercise.

This trend is even more extreme with aerobic fitness and high intensity endurance. We have clients who are able to do 17 rounds of HIIT on the bike, and if they take 2 weeks off, struggle to get through 10 rounds. Yet those who are able to only do 7 rounds can usually get right back to 5 rounds after a 2 week layoff.

Much research shows that performance decreases of 4-25% will occur in 3-4 week training layoffs. Metabolic and structural changes effecting endurance are evident from 3-8 weeks of detraining. Mujika and Padilla showed that within 2-4 weeks, athletes will return to levels above sedentary aerobic fitness, but those who were recently training in endurance will lose all of their progress. And those highly trained in high intensity endurance will take a long time to recover their function. Godfrey reports an Olympic rower who took 8 weeks off required 20 weeks to return to his pre-break status!

The bottom line here is that endurance trained folks should expect a big a dip in performance when they return from a break.

The good news is that your skill and coordination of a sport or movement pattern should maintain, even with breaks lasting over decades (Schmidt, eta la 2000 motor learning and performance). I have worked with many older adults who were deconditioned and weak, yet had trained in dance or martial arts in childhood. Several decades later they are still easier to train and to teach movements that many half their age with twice their strength because they have retained excellent motor coordinate skills.

This has big implications for your fitness training. If you focus on resistance training, the emphasizes on learning movements (versus isolating muscles and performance on machines) those neurological adaptations will likely stay with you longer. So even after a layoff, and the subsequent loss of muscle, strength, and endurance, you will retain the ability to know how to do the exercises.

So if you had been focusing on resistance training, and take some time off, don’t be discouraged thinking that you will waste away all of your progress. If it has only been a few weeks, you’ve likely retained more than what you started with, and still know how to best perform the movements.

The older or more injured you are, the more problems with taking a break.

The biggest change with aging and function is the effects of disuse. Tissues need stimulus to thrive, and without this stimulus, aging tissue will quickly deteriorate. However, although muscle tissue seems to still respond positively to exercise stress, other tissues seem to take longer to recover from stress applied to it, like tendons and cartilage. This is perhaps because, in the case of tendons, they have less blood flow and oxygenation, impairing recovery capacity. In the case of cartilage and non vascular tissues like the meniscus and the disc, they rely on passive diffusion of nutrients facilitated through pressure gradients in order to get enough nutrients and heal. Movement is a critical mechanic for this. Accordingly, older adults or those with damaged tissues seem to need more frequent stimulus to affect joint health and tissue regeneration.

In addition, pain is highly modulated by movement. As much research has shown, movement can lead to neurophysiological mechanisms to lessen pain. Preventing hypersensatization of the peripheral and central mechanisms, which are critical components of chronic pain.

The older you are and the more in pain you are, the more important it is to stay with your exercise program. That does not mean “just keep moving”. While normally daily activity can be great, for those in pain or injured it might be impossible or too much of a stress. Contrary to common thought, exercise when prescribed by the hands of a skilled professional can be discretely dosed to provide the right stimulus without overloading the affected tissues. Related to this is that muscle mass loss increases by 8% each decade starting in the 40s, and nearly doubles to 15% loss by the 70s. The aging adult cannot afford to lose any muscle mass, thus detraining has even bigger consequences for them. I wrote about this extensively here and here.

The deeper ingrained your habits, the less vulnerable you are

The research is sparse on the next topic, but my experience is extensive in this area, and it has a huge impact on your training plan.

These who have made working out a part of their life for years are less vulnerable to failing off the wagon when they go on a workout hiatus. These folks do very well with planned workout breaks.

However, the more fragile your habit, the more vulnerable you are. This is a case when every attempt should be made to get your workouts in, no matter what, even if chaotic schedules or injuries make doing the normal workings seem impossible. BTN workouts are great solutions to incorporate in these cases on the fly.

The more psychologically effected by exercise, the bigger the effect of taking a break.

Many of us are kept sane by exercise. Some get a euphoria or high from working out. Others need it to combat stress. Some just need the “me time” to get to get some space from their workout.

In my case, I simply can’t sleep well unless I regularly work out. It’s like I have pent up energy and exercise is a release valve. My body aches, and feels off when I don’t exercise. It’s a very pragmatic, utilitarian thing for me.

If the above explains you, then taking extensive breaks doesn’t make sense. The main reason I see these people take breaks is because they feel pressured by those who think they are “obsessive” and need more “balance”. While in some cases this is true, in other cases it just makes you feel miserable. So if exercise is a form of therapy for you, and you aren’t harming yourself or your relationships, taking a break probably isn’t a good idea.

Should you take a break during the holidays?

So I touched on some individual circumstances, and the generalities about what to expect from taking time off from a break, and now it’s time to get to the bottom line.

Here’s when I think you should consider shutting down the exercise plan for the holidays:

You are sore, advanced in regards to strength and endurance levels, and well as your body composition, you aren’t making great progress recently, you are over worked, need better balance, and a type A personality, then you should probably take a break (1 week).

Also, if you are making great progress, healthy habits are engrained, you are very busy, have a hard time focusing, and are gearing up to tackle big goals in the near future, but you aren’t in pain and are not psychologically tied in to working out, then consider taking a short break (1-2 weeks max).

However, if you have been procrastinating about addressing your health goals, are in pain, upset about how you look in feel, emotionally affected by exercise, or have a fragile exercise habit, or have high performance aspirations that you’ve been working up to, then do not take a break. Get after it, and start now. The trick is to dose it correctly